Outhouse Digging? What is it?

Imagine years ago there were lots of working outhouses. Many of them had odd things thrown into the hole including depression glass bottles, medicine bottles, bones from who knows what and even the hole that was cut out so you could sit over the hole! Now there are people who specialize in finding the locations of old outhouses that have long been forgotten and then they dig down and pull out all kinds of things.

Is it dirty and full of bad bacteria and germs?

Ummm, yes and no. Yes it is very dirty digging down through dirt especially when it rains and it turns to mud. No, there are no more germs than digging any hole in your back yard. Pathogens have a tendency to die off after less than three years when in the ground.

Charlie Cook originally contacted me about digging and send me some samples from a few of his digs including one of the holes that was cut out of the area where you sit. Click on the links below to learn more.

Rick is a regular contributor and quite the outhouse digger and writer. He has had many articles published along with quite a few pictures of his digs. Follow along as we link to several of his articles.

This story was written before our friend Chris Bear passed away. It was published shortly after. Chris is the one who took us to this cool and crazy dump full of melted and UN melted old bottles from the 1880 to the early 1900s. If it wasn’t for him this story would not have been written.

When I write a story I send in many pictures so the editor can pick out the ones they like. In this story I did the same,sent in a ton of pictures. They didn’t put one pic of Chris in the article. So I have added a few of him in with the story for my web site. Also W&ET cut part of the ending of the original story out, I guess because it was too long or it could have been because it was too crazy of an ending. 🙂 But this magazine pays so I can’t complain. Enjoy.

In 2016, Rick recently won 1st Place in a writing contest and here are pictures of his winnings 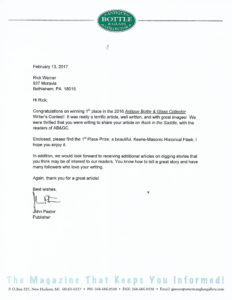 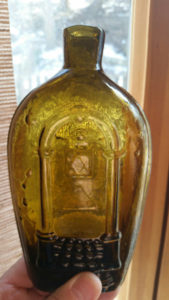 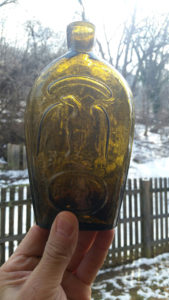 Do you have a story using an outhouse or have a general comment?
“Dump” your answers to the official Outhouse Curator by using the form below…

This site uses Akismet to reduce spam. Learn how your comment data is processed.