This was received from a visitor to our site…

Hello,  In 1968 my husband and I purchased a 1768 New England Saltbox home in Putney, VT,  along with 77 acres of land.  I have a photo of the house and attached barn.

Between the house and barn was an attached outhouse. (I do not have the photo of my 3-holer in its original site.  I do have a photo of it as the headboard of my bed).  Before selling the house, I yanked out the toilet seat, sanded it, and used it as a coffee table.  I thought of using it as a swing.  However, I did not want to drill any holes in it.

Thus, for the past 45 years it has been the headboard of my bed (great pillow rests!).

For YEARS I have been interested in outhouse seats, as well as outhouses. I know of an original 5-holer in the USA, which I believe is displayed in an Inn somewhere in New England.

I’ve photographed many outhouses in Europe.  My most favorite are  2  (each with a step-up to the door) INSIDE THE WALLS of Palazzo Vecchio in Florence.

Plus, within a castle in Perigord, France there is a stone “Latrine” which extends out from the 2nd story.  They have illustrated plaques showing how it was used. 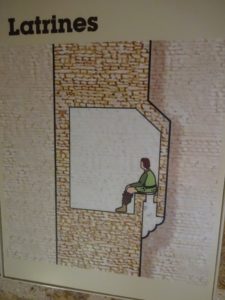 Diagram in a castle showing how the Outhouse works! 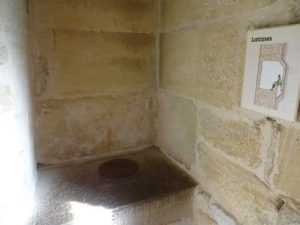 Castle “Inside” outhouse in Perigord France 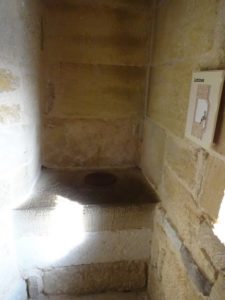 Castle “Inside” outhouse in Perigord France

Ostia Antiqua’s public toilets/baths, ancient fishing port outside of Rome.  Water continually ran under all the toilet seats.  The keyhole face, which is visible under the toilet  seat, is how people were able to wipe themselves.  I gather they used something like a sponge on a stick. 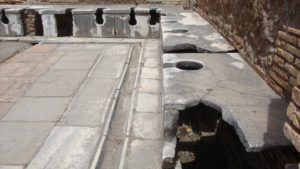 The following pictures are outside the Museo Gallo Romain in Vienne, France.  These resemble Ostia Antiqua’s public toilets/baths.

And below those three pictures, you will see pictures that show information at the site of Vienne’s toilets.